Portfolio > About the Artist

Kelly Birkenruth’s captivating paintings are in the style of contemporary realism while staying firmly grounded in the tradition of the Old Masters. She is able to pull the viewer into her paintings by interweaving emotion with a humanistic quality through her supreme handling of light. Through her portraits and still lifes she is able to evoke sensitivity and empathy, which in turn allows her to create images which transcend mere representation to capture the true essence of her subject. Kelly’s arresting compositions, draftsmanship, use of color and observation of detail allow her to create paintings with a timeless quality. After earning her degree from Pennsylvania State University, Kelly moved to southern California where she began a career as a fashion model. Her agency soon sent her abroad to Paris and Tokyo, where she spent the next several years modeling. When she wasn’t walking the runway, she spent endless hours in the great museums of the world, closely observing and studying the works of the Old Masters. “My time abroad, particularly in Paris, opened my eyes to the vast beauty and power of a great painting. After that I knew I wanted to dedicate my life to the pursuit of Fine Art” said Birkenruth. After returning to the States, Kelly studied at Otis College of Art in Los Angeles, CA. She then continued her studies through workshops and private study with renowned artists such as Daniel Sprick, Steven Assael and Jesus Emmanuel Villarreal. In the spring of 2019 Kelly will be exhibiting 2 paintings at the MEAM Museum in Barcelona, Spain for their Painting Today, International Women Painters Exhibition. Her painting Guarding Her Heart was exhibited at the 2018 Annual National Juried Exhibition at the Wausau Museum of Contemporary Art in Wausau, WI. Her painting Homage to New York was exhibited at the American Women Artists 2018 show Perspectives of the American Experience at the Rockwell Museum in Corning, N.Y. Her painting Venus contemplating her adolescence was exhibited at the Poets and Artists show “Visions of Venus/Venus’s Vision in April, 2018 at the Zhou B Art Center in Chicago, IL. Kelly’s painting The City Awaits received the Award of Excellence at the American Women Artists 2017 Exhibition at the Tucson Desert Art Museum. She was also awarded 2nd place at the Portrait Society of America’s 2015 Juried Exhibition in the Still Life Category and Honorable Mention at the Portrait Society of America’s 2012 Juried Exhibition. She won Best of Show Award in the CT+6 2012 Juried Exhibition at the West Hartford Art League. She was a Finalist in the Art Renewal Center’s International Salon in 2011, 2016 and 2018. Her painting Limes and Laughs has been selected as a finalist in the Still Life/Interior category of The Artist’s Magazine 33rd Annual Art Competition. Artists Magazine named Kelly as Artist of the month for February 2017 and featured a profile of her for their online publication. Her work has also been featured in American Art Collector magazine. Her paintings are in public and private collections throughout the U.S. 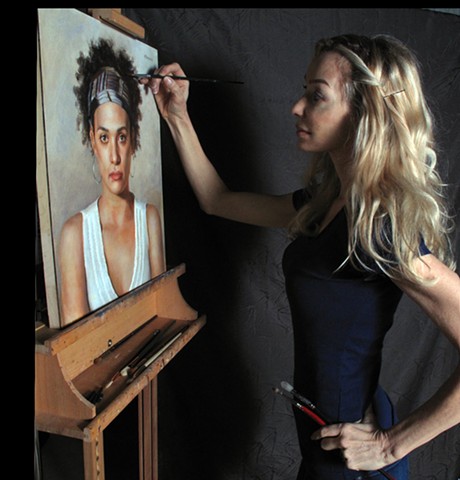